Written by Vivek Shah and published on https://www.carsguide.com.au/.

A supercharger is just a mechanically driven way to pressurize intake air, thus increasing the density of the air. More air means more fuel, resulting in a more powerful combustion that we recognize as increased horsepower. The supercharger is driven directly by the engine crankshaft, either with a belt, chain, gears, or driveshaft. Thanks to the direct connection, there is a correlation between engine speed and blower speed. As the crankshaft spins, it turns a belt that spins another pulley on the supercharger. That one is connected to the internal rotors inside the case. These compress air and force it into the engine’s intake manifold. It might have been a while since high school physics, but compression heats up molecules, so an intercooler is sometimes used to bring temperatures down before the air gets to the intake manifold.

Tech Through Time: How a Supercharged Engine Works 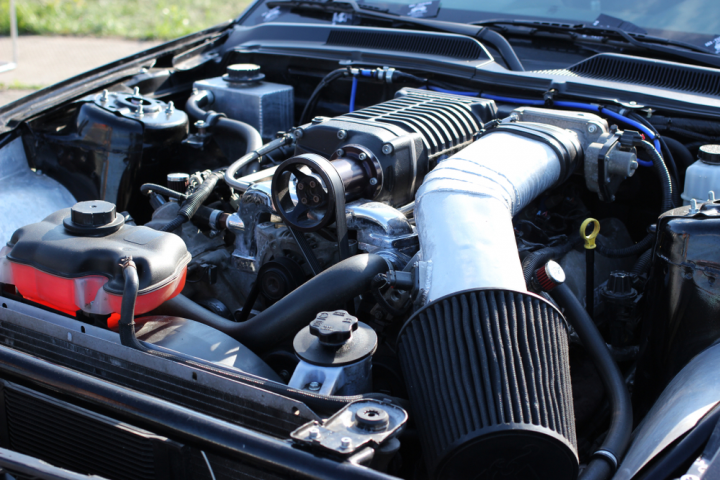 The heart of most vehicles today, the internal combustion engine has advanced significantly over its century long history.

This series outlines some of the key innovations in engine technology before taking a look at alternatives to the combustion engine. This week, how a supercharger works.

The need for power

There are many ways to get more power out of an engine. The most obvious method is to simply increase displacement, by increasing the combustible surface area through the addition of more cylinders. However, this comes with its own disadvantages in terms of increased fuel consumption, weight, and a larger engine, which can adversely affect ride and handling. Another option is to increase the amount of fuel that enters the combustion chamber. Adding more fuel results in a larger explosion and thus the production of more power.

To burn the fuel completely and prevent waste, an engine requires a set amount of air. This is known as the air to fuel ratio, or stoichiometric ratio, and varies depending on the type of fuel used. For example, petrol requires between 13-15 parts of air per part of petrol, depending on its octane rating. Thus, adding more fuel into the combustion chamber alone will not increase engine power, but rather make the air to fuel ratio ‘rich.’ The amount of air entering the chamber must also be proportionally increased so that the ideal air/fuel ratio is maintained.

Superchargers are one way to increase the flow of air into the combustion chamber.

How do they work?

Fundamentally, superchargers work as air compressors. A belt or chain connects the engine’s crankshaft to the supercharger rotor, providing the power necessary for the compressor to run.

Today, there are three main types of supercharger that utilise this fundamental principle, namely Roots, twin screw and centrifugal.

The Roots type supercharger is the oldest application of this technology, invented by Philander and Francis Roots in 1860, originally to blow air into blast furnaces that melted iron. The Roots supercharger works through a pair of rotors that blow air at a high speed into the intake port. As the port then contains a greater quantity of air, it becomes compressed. In turn, this enables a higher quantity of fuel to be injected into the combustion chamber (and thus greater power to be generated).

Roots superchargers are often mounted on top of the engine, thus giving the characteristic protruding air intake that ‘hot-rod’ vehicles are known for.

Two screw type rotors draw in and squeeze the air before sending it to the engine.

Centrifugal superchargers are perhaps the most unique supercharger design. Instead of a pair of rotors, an impeller fan draws air in.

This is similar in principle to how a common household exhaust fan draws in steam or smoke. In a supercharged car, this impeller rotates at a very high RPM, often in excess of 50,000 RPM. Whilst this causes air to be drawn in at a high speed, centrifugal forces compress and slow down the air as it leaves the housing.